Another sea day, our second last for this trip. Tonight is Formal night and the Captains cocktail party for frequent cruisers. There are a few activities today that I'm interested in checking out. After lunch I head down to Connexions for a cocktail, a Raspberry Colada. There is supposed to be a session here at 2 about Losing weight and eating more. Really interesting talk, common sense really but she included straightforward information about how the wrong foods affect your digestion system. Unfortunately the talk was held in the same venue as the trivia at 3 and the talk did take one hour. Some passengers are so inconsiderate and started conversations while she was talking after sitting in the same area, or standing right beside it. This meant we couldn't hear the end of the talk. Unfortunately, there are many inconsiderate people on this cruise. One woman came up to me and pointed to the two empty seats next to me and asked me if I was using them, I said No but I am trying to listen to this lady giving the talk. She just asked someone sitting on the other side of me, like it made no difference. She indicated to her friend who was standing behind me, apparently that the seats were available. He then started talking in his outside voice as he plonked himself on the lounge next to me. I couldn't hear anything by that point so I moved to a seat in the front row, about 2 metres in front of where I was. Now this guy could have used some tips on decreasing his size, perhaps with a few lessons on common courtesy in between. I will ensure I give P&O some feedback on their scheduling and using bars for these kinds of things.

I was going to stay for trivia but decide against it based on the behaviour of these people and knowing my inability to not say anything. Back in my cabin a new friend was waiting for me. 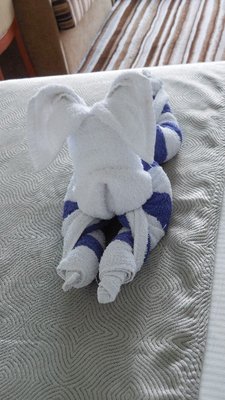 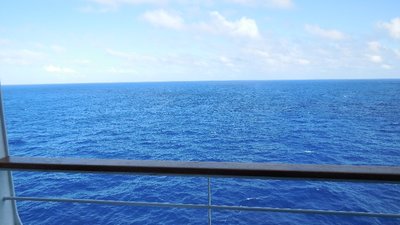 A few hours in my cabin watching movies, drinking hot chocolate and then I was running late to get ready for dinner but I felt calm. The other couple turned up tonight. They had catching up to do with the others so I was able to sit back relax and try to follow the conversations. After dinner, we head to the theatre for a show. The production was good, I didn't understand the costumes but it was entertaining.

Another Sit Down Comedy Club night. Sylvia saved me a seat in front of group of very loud drunk young men and one girl. Apparently the girl hooked up with one of the guys during the cruise, he told everyone during the act. They talked nearly all the way through so I am not sure how the guy was able to contribute when we were asked if anyone had fallen in love during the cruise. OK I'm packing up my cranky pants and going back to the cabin.

Previous Next Table of contents

Comments on this blog entry are now closed to non-Travellerspoint members. You can still leave a comment if you are a member of Travellerspoint.

If you aren't a member of Travellerspoint yet, you can join for free.